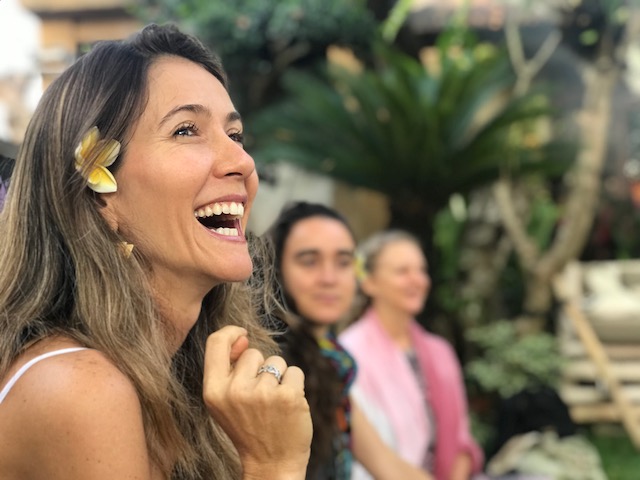 Almost 6 years ago, I was first introduced to cacao as plant medicine. During one of my stays in Bali I experienced the magic of drinking cacao in a ceremonial way. About a year later, I learned more about the historical background – cacao as ritual from Central and South America that was used back in the days to bring about more peace and connection.

Whenever the ancient tribal members would feel they grew distant from nature – their own nature, their tribe or distant from living life in harmony with Mother Nature – a ceremony was summoned. Drinking the cacao in its purest form: Poured with hot water only. Then allowing time in silence & stillness for the medicine to bring about a sense of open-heartedness (through a release of dopamine and serotonin in the body). Using either the form of song, dance or meditation to express, celebrate & integrate.

Today, the ways and rituals of drinking cacao are as creative and diverse as the colors of the rainbow. My preferred way of sharing cacao is to combine it with meditation, sound and song. Using the cacao to open the voice and strengthen the intuitive ability of creating sounds that nourish body, mind and soul. Using the framework of a cacao ceremony to cultivate more gratitude and presence – not taking anything for granted and remembering to take one breath and step at a time. Finding more satisfaction in the here and now.

Cacao is more than a drink of hot cocoa - it is medicine for the heart.

The original name “Theobroma cacao”, which means food for the goods, already suggests that there is something quite special and unique about cacao. Given the fact that we consider cacao in its highest quality – raw and fairly unprocessed.

Drinking cacao in a ceremonial way is different in many ways: Not only is it way stronger and more concentrated, but also is it altered through blessings – by the frequencies of Tibetan bowls, mantras or prayers.

Supported by the research of Dr. Emoto, who observed the structural changes of water molecules depending on vibrations like different thoughts or sounds, a cup of water (or even cacao) can literally be charged with an intention, thought or feeling.

Aiming for the highest qualities that we wish for ourselves & others like health, love, joy, connection.. and ingesting their basic frequencies through drinking the cacao. A first step to embodying higher expressions of self, a first step to loving oneself and others more and more.

Starting to plant a seed of goodness through the cacao.

Learning more about the art of holding ceremony

Cacamo cacao is a high quality brand operating from the Netherlands and distributing cacao grown and harvested in Bali. Not only providing high quality raw cacao, but also sharing the art of celebrating and drinking cacao through weekly online cacao ceremonies (using ecstatic dance, song circles or yoga), I can feel the passion of this start up company and can only recommend supporting them.

As guest teacher of their cacao ceremony facilitator training, sharing my knowledge of conducing sound healings, I am more than happy to share my affiliate link with you upon request to receive a special discount for the entire training. 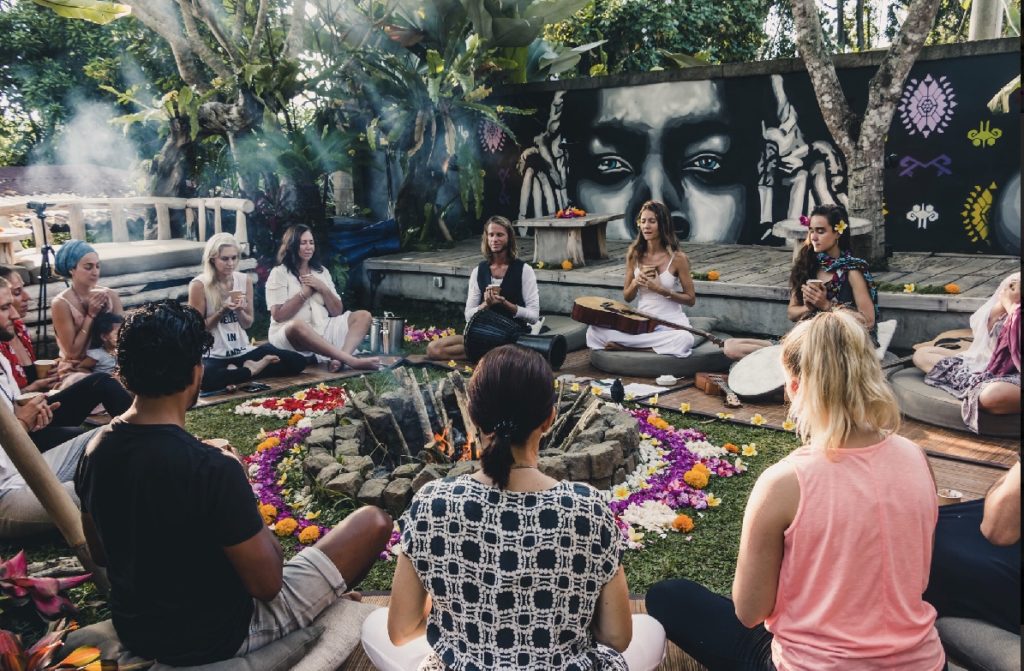 Cacao - step by step:
From the tree to the delicious cacao drink

* Originally, the Theobroma cacao tree grew in Central and Southern America. Today, it is planted all over the globe (also in Bali).

This is how a ripe cacao fruit upon harvest looks like. The white flesh contains the precious beans. 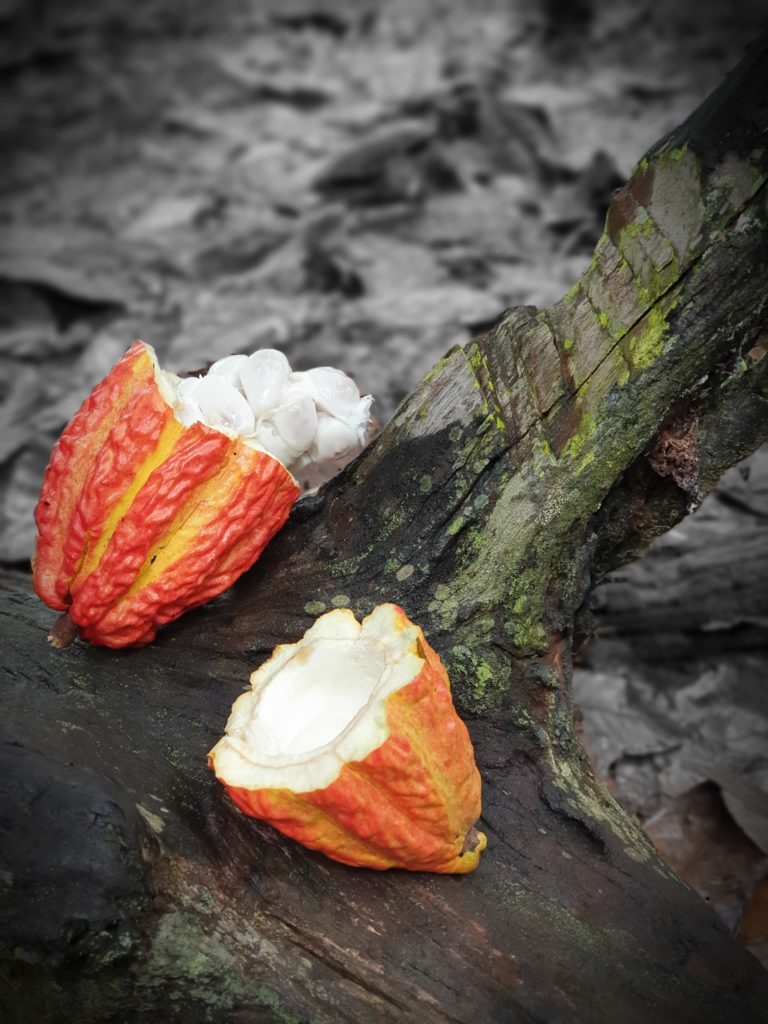 *After cleaning the beans they are dried and sometimes also roasted. Shredded cacao beans are known as ‘cacao nibs’, which are bitter and can be consumed as they are. Delicious in smoothies or as topping for desserts. 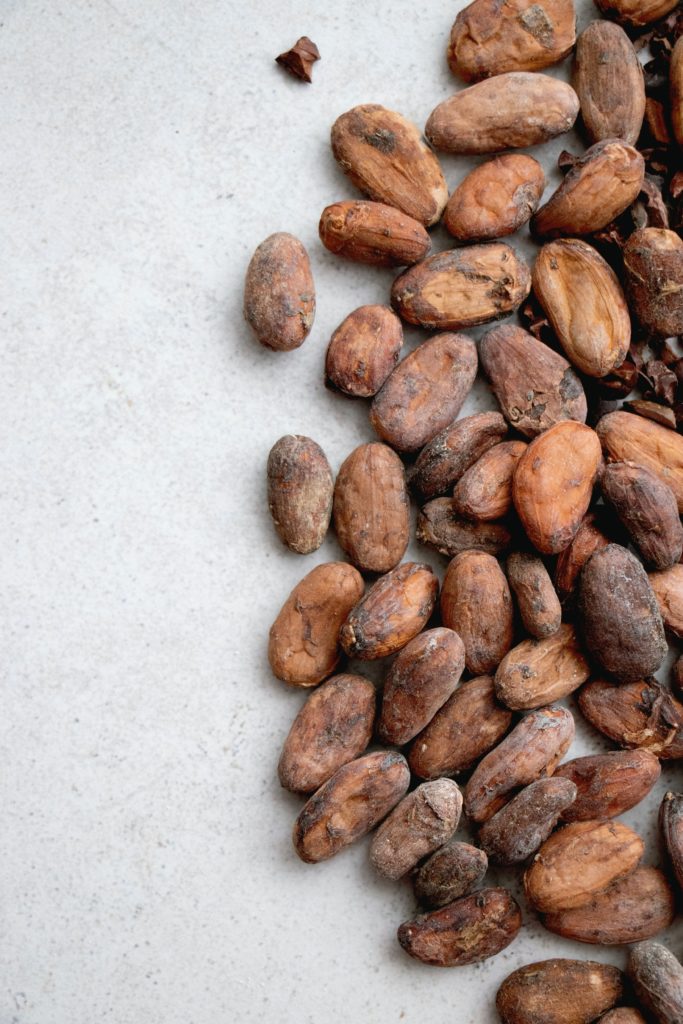 *After turning the cacao beans into a powder or a cacao mass, you can prepare medicinal cacao by adding water, herbs, spices and plenty of blessings. Producing a quite strong and magical liquid.. 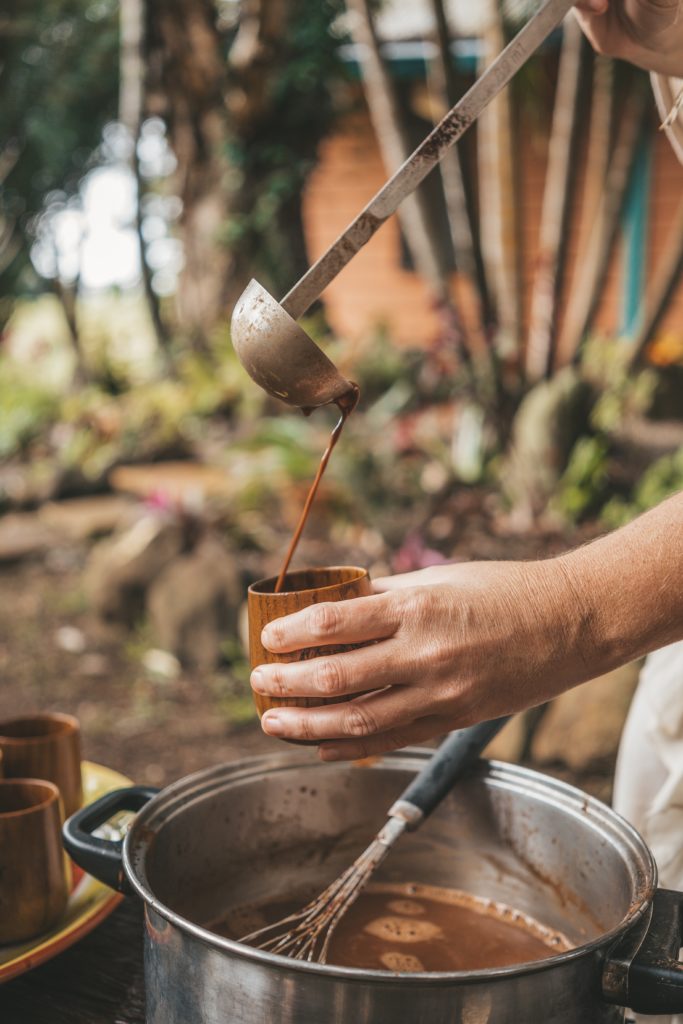 The BALI CACAO CEREMONY has become a unique space to experience the power of the cacao plant medicine, combined with elements of meditation, sing-along music and sound healing.

As I have experienced the Bali Cacao Ceremonies, led by my gorgeous friend Luciana, countless times – I can only verify how beautiful, fun and yet profound each ceremony is! An experience that can gently open your heart, fill you with joy, release negative emotions and energies, calm your thoughts & lead you to believe in your life purpose.

Usually hosted at the stunning grounds of the Pyramids of Chi, located right in the heart of Ubud, Bali. These days you can be also lucky to experience an online ceremony either in English or Portuguese from the comfort of your own home.

Luciana is a Brazilian theta-healer, musician and cacao ceremony facilitator. She is considered to be the “Cacao Queen” of Bali. Her ceremonies have touched the hearts of thousands of people from all around the world.

Each step of the journey is done with music that has the power to transform the vibration of our body and mind. And so does the Cacao, with its heart opening properties. Together the two bring us to a state of bliss. You can experience:

I hope all of this information will inspire you to attend a cacao ceremony and simply experience it all to receive your own impression of it all. Just check out my schedule or check out the links above to experience all the different flavors of the ways a ceremony can be conducted.

If you have any questions or special wishes to have your own, personally tailored ceremony – online or in person for example as a closing ritual for your private retreat – please don’t hesitate to reach out.

Let’s co-create something very special together!